Following the successful presentation of the first four A. Lange & Söhne Chronograph replica wristwatches in October 1994, a proprietary chronograph calibre was at the top of the list of priorities of A. Lange & Söhne’s product developers. After all, chronographs are a long-standing tradition at Lange. Born 200 years ago, Ferdinand Adolph Lange crafted his first chronograph in 1868. It had a single pusher that allowed the chronograph hand to be started, stopped and reset to zero. So the benchmark was ambitious. The new calibre would have to live up to the venerable brand’s traditionally innovative spirit and establish new standards in contemporary precision watchmaking.Subsequent to its successful debut in 1999, Lange established a series of further milestones in chronograph design as briefly described below:

Because of the unique way in which it melds sophisticated technology and eloquent design, the Datograph became the symbol of the manufactory’s quest for innovation. Today, its movement is considered by industry experts and connoisseurs to be one of the most beautiful chronograph calibres.

Datograph (1999)
With a classic column-wheel configuration, a precisely jumping minute counter, a flyback function and the iconic Lange outsize date, the 1999 launch of the A. Lange & Söhne Datograph chronograph copy watch exceeded all expectations. The column wheel assures that all chronograph functions are reliably controlled. The jumping minute counter always delivers a precise reading of the stopped times. And the flyback feature allows instantaneous consecutive measurements of event durations.

Doublit Split (2004)
For the first time ever in mechanical timekeeping, the DOUBLE SPLIT enabled measurements of events that lasted up to 30 minutes. With a separate rattrapante hand above the minute-counter hand, A. Lange & Söhne added a fascinating dimension to the stopwatch principle. Additionally, the L001.1 manufacture calibre is the first Lange movement to be equipped with a balance spring developed in-house.

1815 Chronograph (2004)
Its design reflects the style of the historic pocket watches crafted by Ferdinand Adolph Lange, whose birth year is part of the name of this timepiece. Thus, it pays tribute to the founder of A. Lange & Söhne’s heritage in chronographs. The DATOGRAPH calibre without the outsize-date display beats inside the 1815 CHRONOGRAPH. Since 2010, the movement has been endowed with an extended power reserve of 60 hours and the proprietary Lange balance spring.

Grand Complication (2013)
With seven complications, the Grand Complication is the most intricate timepiece ever crafted in Germany. It features a split-seconds chronograph with a minute counter and flying seconds, a chiming mechanism with a grand and small strike, a minute repeater and a perpetual calendar with a moon-phase display. Symbolically, it expresses the aspiration of the brand to continually reinvent itself and venture forth to the outer limits of what is technically feasible.

Tourbograph “Pour le Mérite” (2005)
Lange’s highly complicated L903.0 calibre is the first to combine a split-seconds chronograph with a one-minute tourbillon as well as a fusée-and-chain transmission. Thus, two of probably the most elaborate mechanisms for improving rate stability and rate accuracy are integrated into a single A. Lange & Söhne Tourbograph watch. It is the second Lange timepiece with the designation “Pour le Mérite”, a hallmark reserved by Lange for extraordinary complications such as the fusée-and-chain transmission. 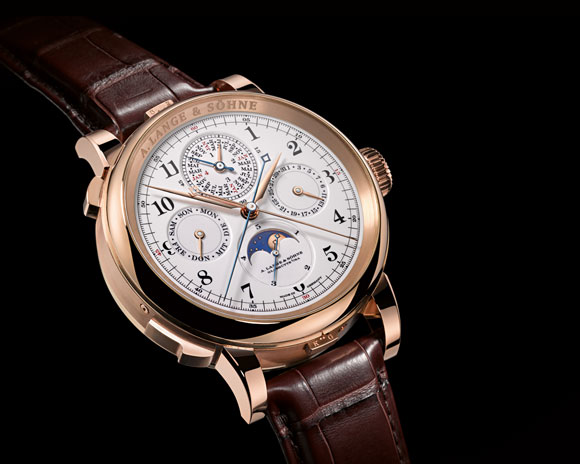 Datograph Perpetual (2006)
The inner life of the Datograph Perpetual is stunningly complex. Since 2006, the name has stood for the formidable twosome of a flyback chronograph and a perpetual calendar. Apart from the day of the week, the month, the four-year/leap-year cycle and the moon phases, the watch also indicates the day/night transition. The model is available in platinum with a rhodié dial, and since 2015 in white gold with a grey dial.

Datograph Up/Down (2012)
With a power reserve extended to 60 hours, a power-reserve indicator and a proprietary manufacture oscillator, A. Lange & Söhne proves that even a horological superlative can be bested. The Datograph Up/Down comes in a 41-millimetre platinum case, and since 2015 in a pink-gold case as well. The black solid-silver dial forms the ideal contrast-enhancing backdrop for the bright argenté subdials and the Lange outsize date.

1815 Rattrapante Perpetual Calendar (2013)
With a split-seconds chronograph, a perpetual calendar, a moon-phase display and a power-reserve indicator, this watch unites more horological complications than the clearly organised dial suggests at first sight. Stylistically, like all models of the 1815 watch family, it evokes the grand tradition of A. Lange & Söhne 1815 Rattrapante Perpetual Calendar chronograph fake in pocket watches.