Today, 195 years ago Bovet was officially founded in London. Ironically it did not mark the beginning of the journey, as Jean-Frédéric Bovet had already had the foresight several years earlier to send his three sons to London, the epicenter of watchmaking during those days. From there the brothers would venture out and win the favor of the Emperor of China and his court, with their elaborately decorated pocket watches.

They show off these decorations the brothers were the first to develop a glass case back. This sense of innovation lived on later in the history of the brand as they introduced in the 1920’s a pocket watch with a still mind-boggling power reserve of 370 days.

Since 2001 Bovet is in the capable hands of Pascal Raffy, who reinvented the manufacture based on its history. High-quality finishes and elaborate decorations are still one of the brand’s pillars, much in the same way as they were during the time of the Bovet-brothers. Raffy didn’t stop there and went out to create a manufacture for which complications became a second-nature, all bound together with a design that stands out. 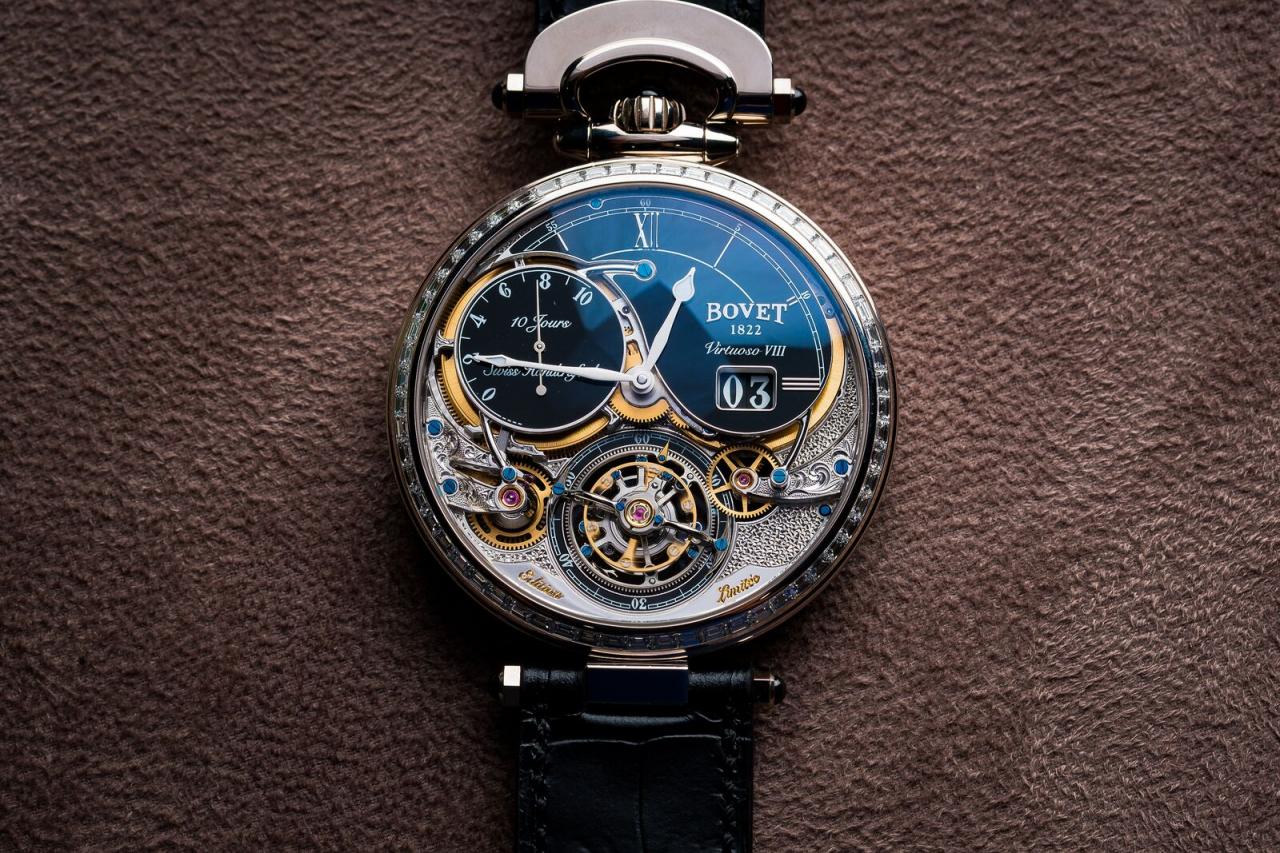 One of the watches Bovet is celebrating their 195th anniversary with is the Virtuoso VIII. It combines many of the historical aspects of the brand, such as elaborate engravings of the movement, and a generous power reserve of ten days. Bovet complements this with a big date function, as well as a flying tourbillon. Dials are made from black lacquer, ivory or blue aventurine, and you seriously wonder why Bovet felt the need to put “handcrafted” on the dial, as such intricate beauty can hardly be created by a machine.

Récital 20 Astérium
Bovet is a brand that I feel has been overlooked by many and does not get the recognition that it deserves. Ironically, their designs can be divisive, but it is hard to deny that the technical art behind them. At SIHH 2017 earlier this year, Bovet released yet another super-complicated piece called the Bovet Récital 20 Astérium. Though the watch may look complicated, its sophistication actually arouses really functional complications.The Bovet Récital 20 Astérium is available in red gold, white gold, and gold. The case is big, measuring 46mm across and 18.3millimeters in height. It’s a huge watch and one that has plenty of wrist presence, but what’s really interesting about the case is that it is wedge-shaped. It is thicker at 12 o’clock and tapers off at 6 o’clock. The cause of this is to accommodate the movement, which has a terraced structure, a trait that you rarely see in watches. The expansive sapphire crystal is also heavily domed to provide room for the unique motion architecture.During very first impressions, the Récital 20 Astérium looks imposing and complicated. But it is in fact rather simple to read and therefore laid out once you understand what’s what. On the other side at 12 o’clock, you get a large domed piece of transparent quartz that shows the constellations. The watch could be customized to reveal constellations in the northern or southern hemisphere, and the constellations are laser engraved and full of Super-LumiNova to help legibility at night. Underneath, there is a disk where the hours are published.

The Récital 20 Astérium is another way in which Bovet celebrated its 195th anniversary. Again, this watch will tempt you with a flying tourbillon, generous ten-day power reserve, and even an annual calendar, but that is only scratching the surface of what this Bovet is really about. Constellations are laser-engraved on a blue sapphire crystal and even coated with Super LumiNova, displaying the night sky with great precision. An equation of time indicator provides you with the correct deviation between solar time and time as we measure it. The back of the Récital 20 Astérium only shows part of the movement, as the majority of it is dedicated to showing the dates, months, seasons and zodiacs.

It is this combination of complications, craftsmanship, and eye for detail that have made Bovet one of a unique brand in the field of Haute Horlogerie. Happy birthday, and that the best may yet to come!